Friends of the NRA Fundraiser

This year the County Line Friends of the NRA fund raiser was held at a barn in nearby Herald. The barn is a lot bigger than the hall we rented for last year's fund raiser. But the acoustic was horrible. There were about the same number of people this year when compared to last year's event.

Everyone on my table agreed that the bar-be-cued tri-tip, salad and beads were delicious. Simple but superb. 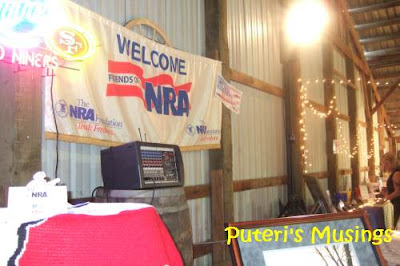 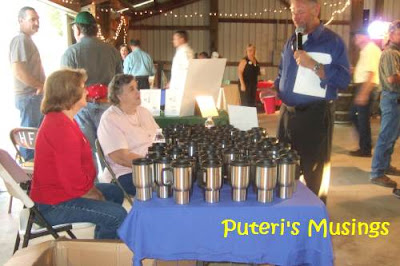 For twenty dollars, you get a mug where there were between $20 - $100 worth of raffle tickets in it. Of course it is a game of chance and you do not know whether you have more than $20 worth of tickets when you buy a mug! 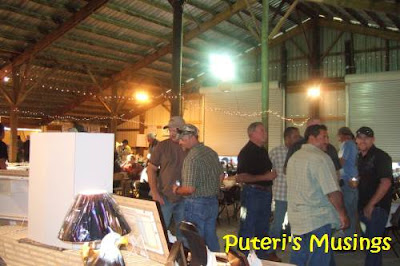 Red necks clinging to their guns and religion? Heheh, the joke's on Obama! 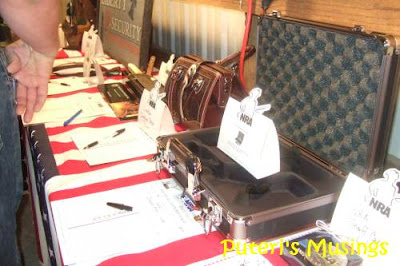 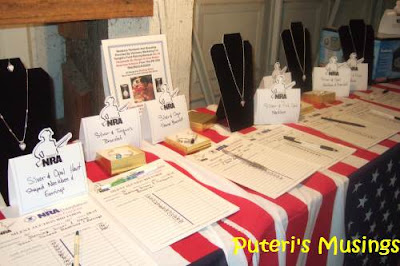 Jewelry on silent auction. There were a few pieces that I really liked and found it hard not to make a bid on them! 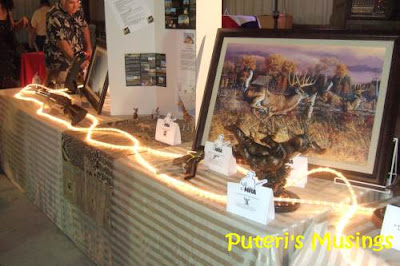 There were some really interesting items on auction. A professional auctioneer led the auction. 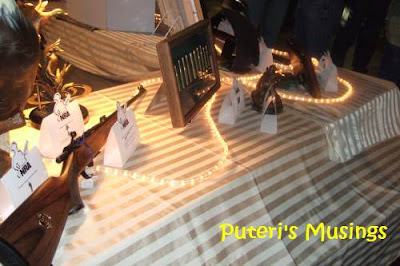 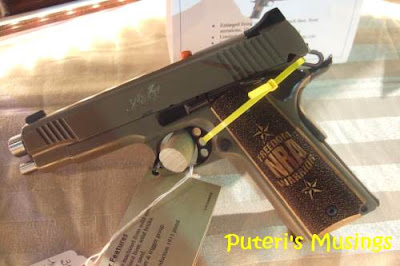 This special edition hand gun was one of the items put up for auction. 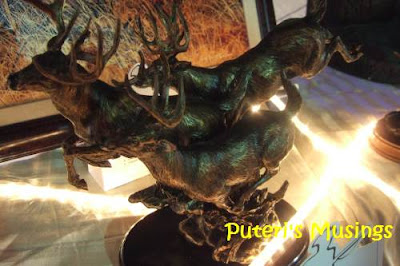 This bronze deer sculpture was one of the items on auction. 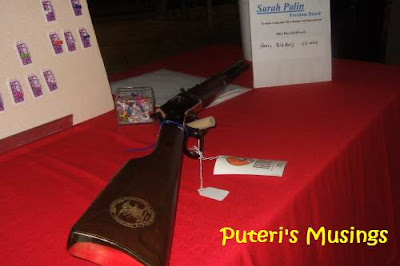 I had hoped that I would at least win one item this year. I bought a $20 ticket on the Sarah Palin Freedom Board, for a chance to win this gun. 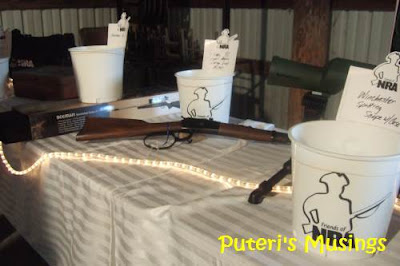 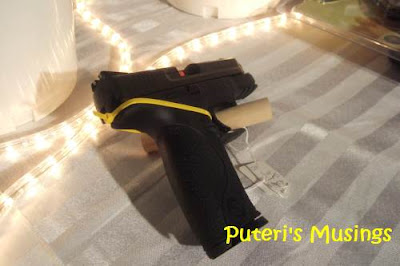 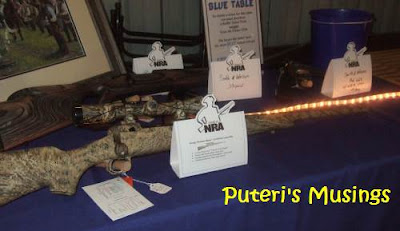 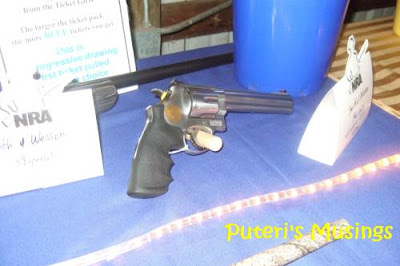 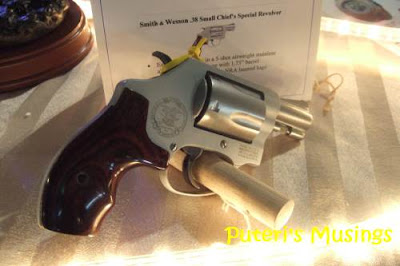 I bought a $100 worth of raffle tickets and had hoped to win at least one of these beauties. Alas, Lady Luck was not with me that evening! :-(

Labels: Friends of the NRA, Ramblings

Last week, Denice was invited to join her classmate to her dance class during their Bring a Friend Week. Denice was very excited about the event and looked forward to it.

Unfortunately when we arrived at the dance studio she had an anxiety attack, cried and refused to even enter the studio. She already had her tap dancing shoes on but it was like making her take a shot at the doctor's office!

Anyway the dance teacher let us in the studio and we sat in a corner and watched the kids go through their exercises. I encouraged Duncan to join the girls just to encourage Denice. He had a lot of fun! 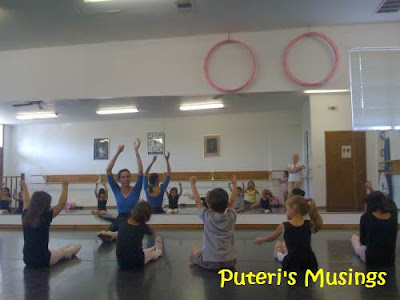 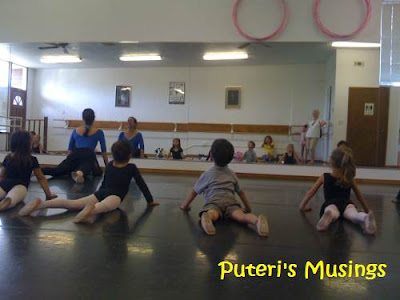 I found a pair of ballet shoes for Duncan and he put them on. He didn't care they were pink! 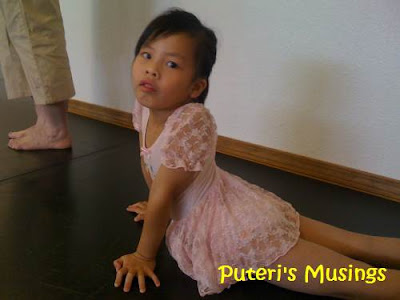 Towards the last 20 minutes of the class, Denice relaxed a bit and started imitating the moves from her corner. She still refused to join them on the floor though. 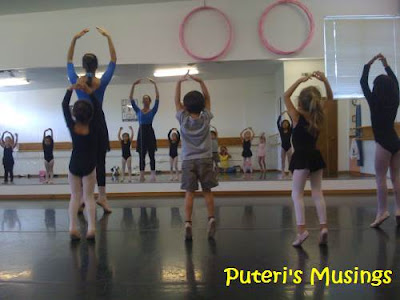 Can you see Denice in the mirror imitating the dance move? I was busy taking photographs and did not notice that she had started following some of the dance moves. 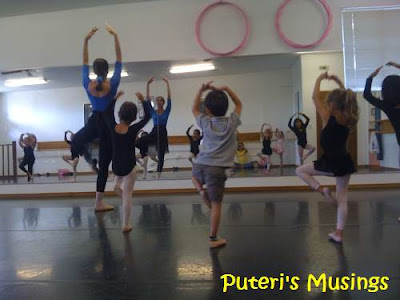 But at the last 10 minutes of the class, she joined the other kids for the story telling session and also followed some of the moves.

In the car, on our way home, she said she wanted to go to another of the dance class. Too late Denice, you had your chance and you blew it!

Actually, we are planning on sending her to a dance class. The fall classes are now open for new students. They also have jazzercise for adults at that dance studio. I might sign up for that too.
Posted by Puteri on Tuesday, September 30, 2008 7 comments:

I love my iPhone!

Two nights ago, as I was doing research for a review I was going to do, the lights suddenly went out. My surge protector beeped for a while and then my computer completely shut down. We suspected that someone had crashed into a power pole because the lights flickered twice as if trying to get power from somewhere else.

Anyway, it remained dark for at least 45 minutes. BUT, about 2 weeks or so ago my mother-in-law upgraded my Motorola Razr phone to an iPhone 3G. That means despite not being able to use my desktop computer, I was still able to browse the internet and read up on the days news online using my iPhone by candlelight! Woohoo! 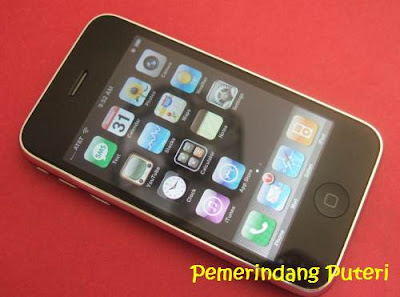 I really love my iPhone. It has a calender and I am now using that feature on the iPhone. I don't have to scribble on my appointment calender hanging on my wall for upcoming events. I like the fact that the iPhone calender has an alert feature, and that helps remind me of the appointments that I have for the day.

Previously, I never thought I needed a PDA because I didn't have to keep track of too many things. Moreover, I did not think I was going to be able to learn how to use one! Heheh. But now my kids are in kindergarten, and there are appointments that the kids have to go to like Duncan to his speech therapy, or their dental appointments and my weekly meetings with some ladies at church and also reminders for upcoming events.

Also I like the alarm feature. I use the alarm to remind me to pick up the kids after school, and take my hypertension medication. Without these alarms, many times I would most definitely have forgotten to pick up my kids or take my medication!!

My favorite feature on the iPhone (besides the phone itself and the built-in iPod) is the internet browsing capability. The family plan that we are on (paid for by my in-laws) includes unlimited web browsing. That means while I wait for Duncan to finish with his speech therapy, I can browse the web! Forget about a bulky book!! And while I eat my breakfast at home, I can read up on the days news on my iPhone instead of holding a newspaper! Woohoo!

Yes, yes, I am quite enamored with my iPhone!
Posted by Puteri on Wednesday, September 17, 2008 8 comments:

I think if we are concerned about whether or not there are convicted child molesters and other convicted felons living in our neighborhood there are free resources like the online Offender Search database of the Sacramento County Sheriff's Department website that we can look up.

But if you are an employer or a landlord and wants to do a Background Check or a Criminal Check of your potential employee or tenant, a sheriff's department Offender Search database is not going to be enough. You want a company or a service that can provide a comprehensive criminal check showing felonies, misdemeanors, sex offenses and more at the state and county levels. For such a comprehensive service there is usually a fee involved, but the information you get regarding your potential employee or tenant is worth the fee you pay.

As a parent, I appreciate the fact that the people my children are in contact with, like those at their school and my church, have each gone through a thorough Criminal Background Check. As a parent I cannot be too careful about whether or not the adults that they are exposed to have a criminal history.

It has been a while since I looked at the sex offender registry for the county I live in and I think it is time that I look it up again!
Posted by Puteri on Wednesday, September 17, 2008 1 comment:

I took Duncan for his first speech therapy session for this new school year last Monday. From what I observed during the session this speech therapist will be good for Duncan. She was firm and got Duncan to do what she wanted. Duncan is the kind of kid who finds it difficult to sit still for long and focus on the activity at hand.

The only disappointment I have over this speech therapy thing, is that Duncan is only entitled to 15 sessions this year. Why? This special ed service receives federal funding and one of the conditions that this service is offered is that the child must attend a public school. Duncan is in private kindergarten. I thought the condition was unfair and discriminatory. As a taxpayer, I have no choice whether or not I should pay the school taxes. Part of the taxes I pay goes to the schools in the school district that I live in.

I have a meeting scheduled with the therapist and another therapist the middle of next week, to see if there was anything they could do to fit Duncan into one group speech therapy session, that is, besides the 15 one-on-one session that he is entitled to.

I think my health insurance covers speech therapy, but who wants to drive 10 miles to go to a speech therapy that lasts half an hour when there is one offered just 2 miles down the road? I hope the therapists can work something out for us because I believe there shouldn't be any discrimination in the special ed services offered. It shouldn't matter if your child is in public school or private school.
Posted by Puteri on Friday, September 12, 2008 2 comments:

Last month before we made our way back to California, we visited Kelantan. It had been more than 25 years since I was last in Kelantan and I don't remember all that much about Kota Bharu. There were two things I remembered most about that first trip. One, I couldn't understand a word of the Kelantanese dialect, and two, I enjoyed the different foods there.

This time around, I did not have difficulty understanding anyone, probably because they mostly spoke the proper Bahasa Malaysia except with their Kelantanese accent, and the food was as fabulous as I remembered!

Er, except for the tough squid that I had at the food market!

One of the things that surprised me most, something I never knew about Kelantan, was the number of Buddhist temples found there. And I am not talking about little temples! These are large temples with large statues of Buddha in them. I did not associate Kelantan with Buddhist temples. In Sabah and Sarawak, and even Penang, yes, but Kelantan? 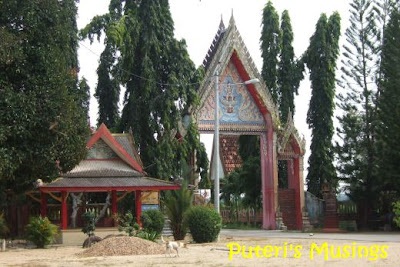 This is the entrance to the Thai Buddhist temple called Wat Photivihan. 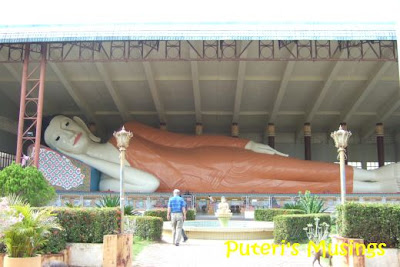 This reclining Buddha is huge. You would expect to see a Buddha statue like this in Thailand but this Buddha is found at Wat Photivihan in Tumpat, Kelantan. 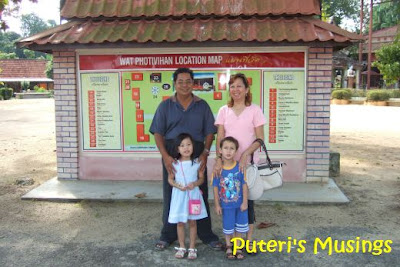 A pose with Zawi. Zawi was kind enough to take us around Kota Bharu and surrounding areas when we visited Kelantan. 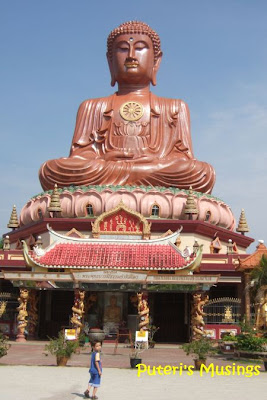 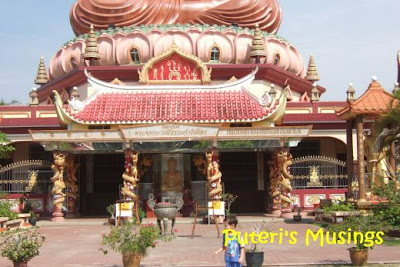 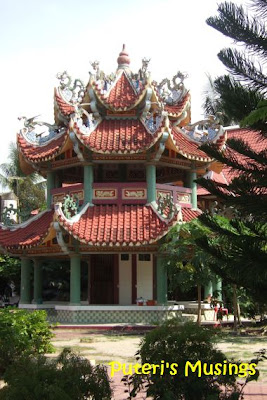 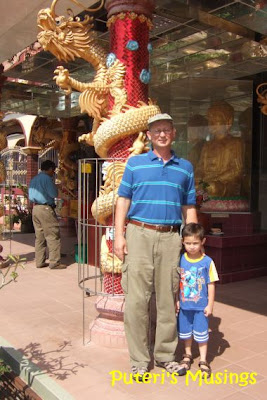 I thought it strange that there were dragons in this Buddhist temple and statues of Chinese deities.

In the evening, after a day of sight-seeing Buddhist temples and being driven to some other attractions in Kota Bharu, we met up with a few bloggers and their friends and family at a restaurant serving Kelantanese cuisine. It was a popular restaurant and Doug was impressed by the food he ate. 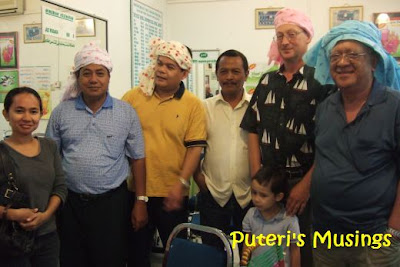 L-R: Awin, Zawi, Pakpayne, Kamal, Doug and Captain Yusuf, and Duncan in the front. Wan Aziz is not in the picture.

Doug is now keen to see the other states in Peninsular Malaysia after that visit to Kelantan!
Posted by Puteri on Wednesday, September 10, 2008 1 comment: