Denice, Duncan and I were in Malaysia for almost three months during the summer. Because it was such a long holiday, I decided to enroll them at a kindergarten owned by a friend of mine. I did not want them to spend their days watching TV at their grandparents' home and neither did I want them to forget what they had learned before they went on summer break! 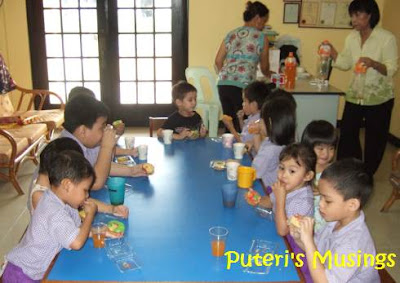 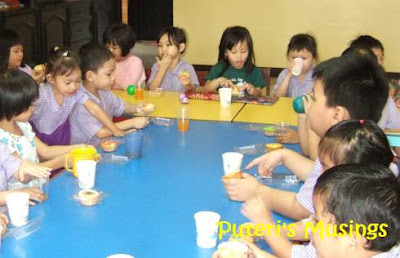 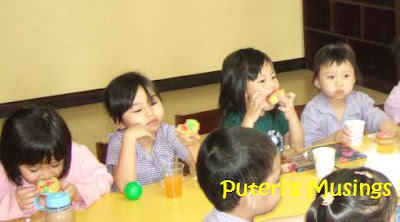 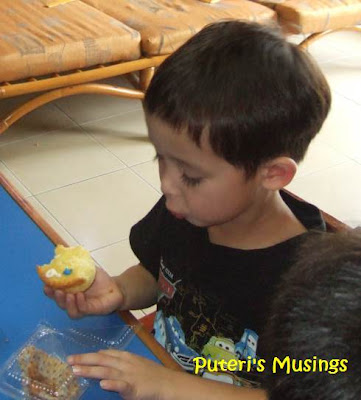 I think they enjoyed their cupcakes if the pictures above are any indication! The icing decoration on each cupcake was different from the rest. As you can see from Duncan's picture above, most of the kids ate the icing on the cake first before they finished off the cupcakes!

Denice and Duncan were each presented with some farewell gifts from the school. I did not expect that from the school and the gifts were greatly appreciated. 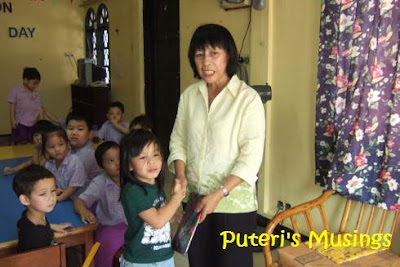 Teacher Janet, the principal of the school, presenting Denice with a gift. 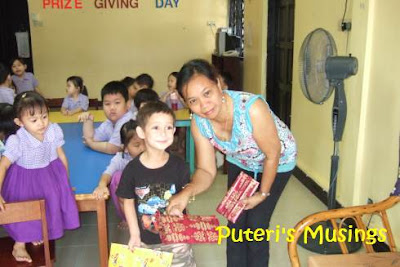 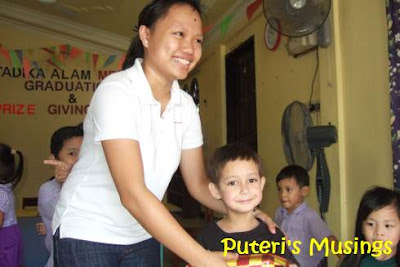 Teacher Molly was Duncan's favorite teacher. I think she reminded him of his favorite baby-sitter. He would drag Teacher Molly out to the car at the end of the school day. He wanted her to come home with him. Or he would tell me to take him to Teacher Molly's house. The kid was quite enamored with the teacher! I think she was quite sorry to see Duncan leave when it was time for us to return to California.

I am glad the children got to make new friends during the summer and the next time we return for a visit, they will be too old to go back to that school.

Fortune in the ear lobes

It has been said, mostly by the Chinese, that those who possess thick ear lobes are destined for great luck and wealth.

One of my friends possesses such ear lobes. When she was a college student, many "towkays" commented on her ears. She did not understand what it was about her ears that the Chinese "towkays" saw as "banyak nasib" (very lucky). It was later on that we realized that they meant the shape of her ear lobes.

I think, for my friend, what the Chinese "towkays" saw in her fortune was certainly true. Recently, I visited my friend's new home and I was suitably impressed. I wished I was a better photographer and knew how to capture the beauty of her home much more clearly. 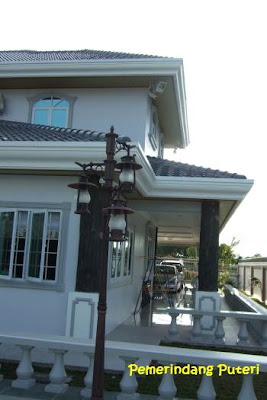 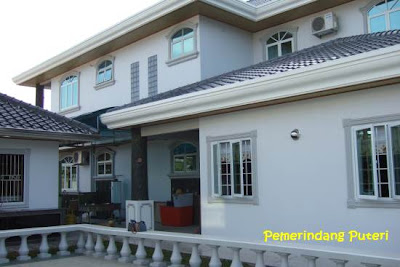 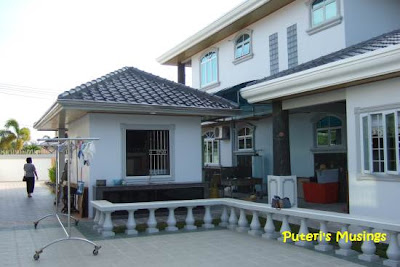 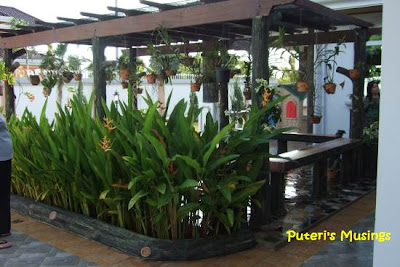 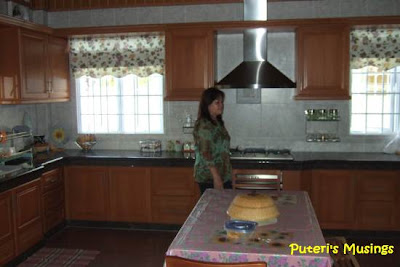 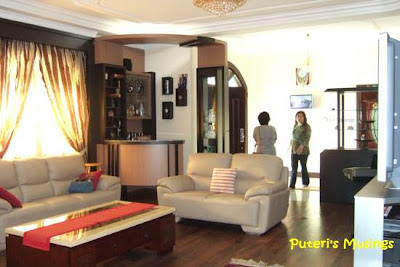 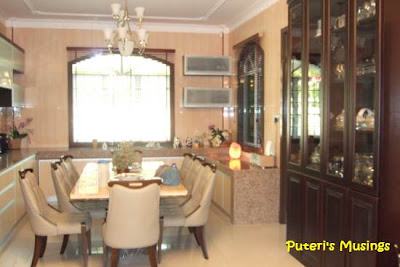 The house is quite close to a main road but you will understand why that fact didn't bother her. 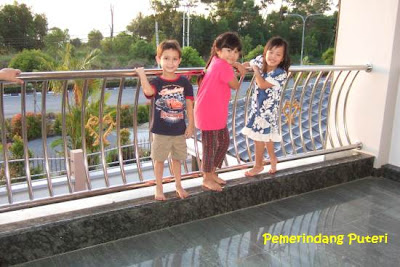 This is the view from the balcony. Her husband loves to jet ski, so having a home that is just across from the beach is an asset for him. 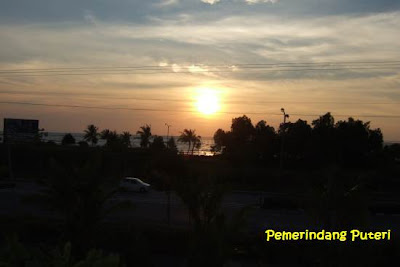 My friend is married to a man who wasn't born into wealth. And neither is he a businessman who founded his fortune on his business acumen. He's a man who possesses a job skill that is in great demand, and he is willing to travel far to make that money ... what I call money earned through his own sweat.

I think my friend is blessed materially and financially, and the best part of it all is that neither she nor her husband stints on their wealth. They are generous to a fault.
Posted by Puteri on Thursday, August 21, 2008 10 comments:

To Sibu in a Fokker

The first leg of our flight back to California was via Sibu. A blogger friend had just got married (we missed the church wedding) but we did make it to the wedding reception held at the Rejang Ballroom at the Tanahmas hotel.

I was quite nervous about flying in a Fokker to Sibu from Miri because it has been decades since I last flew in one! Days before the flight, I had been agonizing over the weather conditions. As it turned out, it was one pretty smooth flight with hardly a bump! 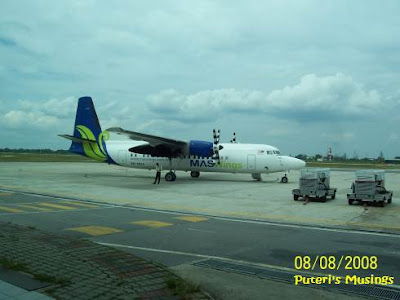 This was the plane that we flew in to get to Sibu. I do not know where it originated from before it proceeded on to Sibu. There were many foreign tourists getting off that plane before we boarded it to get to Sibu. 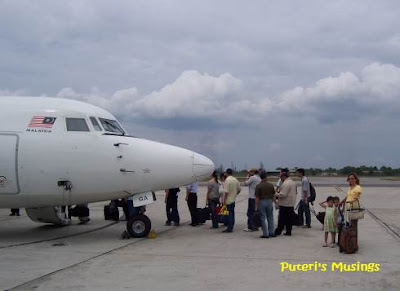 We let every one else get on first. Of course Doug couldn't resist taking pictures of the plane! He was a helicopter mechanic at one time and he loves everything to do with aviation! 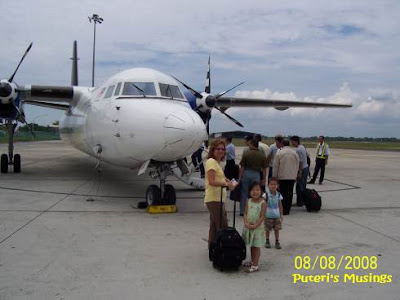 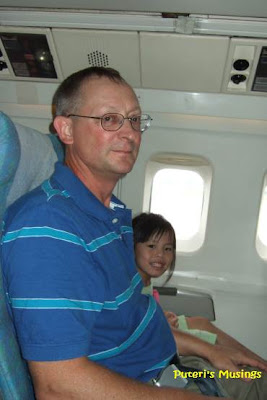 Denice and Daddy sitting across the aisle from Duncan and me. The plane flew mostly along the coast of Sarawak before flying inland towards Sibu. Like I said, I was quite surprised at how smooth the flight was. The last time I flew in a Fokker, we hit several air pockets and that experience is burned in my mind! Hehe.
Posted by Puteri on Wednesday, August 20, 2008 2 comments:

We (Doug, kids and I) arrived in Kota Bharu yesterday. We flew in from Sibu (after a 2 nights stay there) to Kuala Lumpur and then onwards to Kota Bharu.

Zawi was on hand to greet us on our arrival. We had so much luggage (all of 91 kgs!) that we hired a taxi just to transport our luggage while Zawi drove us in his car to the hotel.

The last time I was in Kota Bharu was in 1981. I do not remember much of the city except for the old market which happens to be very close to the hotel we are staying in. One of the first things that struck me this time was the large number of swifts flying in the sky in the evening and the sounds of the birds. Later I discovered the loud bird noises were actually recordings. I don't remember where exactly I heard the same kind of recordings. It seems that some shop owners in Kota Bharu are using the top portions of their shop lots as places for the swifts to build their nests. A coffee shop owner told us this morning that there was much money to be made from the bird nests that the birds built on their property.

The other thing I found quite amusing was when I left Doug and the kids in the hotel this afternoon while I went out for a shampoo. I first went to a salon that I had seen earlier in the day but only to find out it was only a beauty salon. I asked the lady in the shop where the closest hair salon was, and she told me there was one in the next block. I walked along the kaki lima and looked up for a sign that showed a hair salon. I didn't see any. Then I asked a hardware store owned by a Chinese couple, and they had to think long and hard for the location. :-) It was actually a few doors down on the third floor. I had to ask some men sitting at the entrance of the stairs if there was a hair salon upstairs, and they all told me there was one on the third floor. Salon is too fancy a word to describe the place. It looked like a barber shop - the kind my father went to! I did get my shampoo, nothing liked what I got at the hair salon in Miri! The hair dresser did her best to style my hair the way I wanted it, and she told me most of her customers didn't bother with any fancy styling because they would put their tudung (head scarves) back on after the shampoo! The price of my shampoo today can't be beat! It only cost me six ringgit!

This morning we took a taxi to Kampung Kraftangan and then walked to the other museums close by like the War Museum, and an old palace. Er, can't remember what's it called! I enjoyed looking at the architecture near the place.

The wi-fi connection from our hotel room is not very reliable so I won't bother trying to upload any pictures just yet. Stay tuned for the next installment.
Posted by Puteri on Tuesday, August 12, 2008 3 comments:

Vacation coming to an end

Doug is arriving on Thursday 7th August, and that means it is time to go home. We have been in Malaysia for about two an a half months already and by the time we actually leave for California it will be just a week short of three months.

But before we actually board the plane for home, we will be making two special stops. On August 11th we will be flying to Sibu to attend a blogger friend's wedding reception. I met her for the first time in Bintangor over the Gawai holidays last June. She is marrying a Canadian and Doug and I take this opportunity to wish her and her future husband a long, happy marriage.

After Sibu, we will fly to Kota Bharu on August 11th to meet up with Zawi. It so happens that during our trip there, three other bloggers will also be town. Zawi will have his hands full entertaining the visitors! Zawi has even organized a Kelantan bloggers get-together to welcome the visitors. I look forward to that gathering.

We'll be spending just one night in Kuala Lumpur before we fly home to California. I wished I actually had more than one night though. We are planning on spending that evening with a few friends over dinner. Its been years since I saw one of those friends. I am really looking forward to that evening.

The kids are totally oblivious to the side trips we'll be making before we head home! They are just happy that Daddy will be here in a day's time.

I am looking forward to being home myself. Blogging is not that fun with an unreliable internet connection! Home is where my reliable DSL connection is! Spoken like a true blogger, eh!
Posted by Puteri on Tuesday, August 05, 2008 5 comments: