(Reuters) - Forget about getting a job as a police officer in Indonesia's Papua if you have had your penis enlarged. You won't get it, according to local media reports citing the Papua police chief.

An applicant "will be asked whether or not his vital organ has been enlarged," said Papua police chief Bekto Suprapto, quoted on local website Kompas.com.

"If he has, he will be considered unfit to join the police or the military."

Indonesia's remote easternmost province is home to Papuan tribes, many of whom are known for wearing penis gourds.

A low-level separatist insurgency has waged in the resources-rich part of Indonesia for decades and there is a heavy police and military presence there.

Papuans use a local technique to achieve the enlargement, according to a sexologist quoted by local newspaper Jakarta Globe, wrapping the penis with leaves from the "gatal-gatal" (itchy) tree so that it swells up "like it has been stung by a bee," the expert said.

This story really caught my attention today because the heading in large font was - Police barred from penis enlargement.

Won't a bold headline phrased like that catch your attention as well? Well, my attention was caught alright!

I have watched programs on National Geographic featuring this particular tribe from Papua New Guinea wearing the gourds over their penises. Don't ask me why they do that because I never did find out from the programs I watched. Er, maybe I wasn't paying attention to what the narrator was saying because I was too fascinated and repulsed at the same time from the sight of gourds over penises!

The story about the penis enlargement did make me wonder though. After the effect of the gatal-gatal leaves dissipates, do they rub the leaves again to maintain the size?

Don't these men scratch themselves since the leaves do make them feel itchy? Or is the scratching satisfied, er, er ..... you know what I mean, lah!

I guess these men who had their penis enlarged better look for other jobs since the police force find their package a hindrance!

It's no secret that Apple's been coming out with new iPhone every summer for the past couple of years, but Gizmodo's monster scoop of what appears to be the next-generation iPhone might keep consumers from buying existing models — and at least one Wall Street analyst thinks Apple might react to that possibility by announcing the new iPhone ahead of schedule. Will that really happen, though?

In an e-mail to Cult of Mac, Piper Jaffray analyst Gene Munster wrote that he thinks Apple might "come out" with the fourth-generation iPhone "sooner versus later" thanks to Gizmodo's bombshell scoop last week. Why? Because "it's safe to say, more people are now waiting for the new one," resulting in "a negative" for sales of existing iPhone models in the coming weeks, Munster wrote.

How much earlier? Munster didn't say, but Apple revealed its previous two iPhone models — the 3G and the 3GS — at its annual Worldwide Developer Conference in June, and (up until now, at least) there's no reason to believe Apple will change course this year.

Indeed, the latest round of rumors (based on reports of suspicious-looking bookings at the Moscone Center in San Francisco) pegged June 22 as the day when Apple might take the wraps off its latest iPhone. But Apple hasn't even officially announced the dates for this year's WWDC, much less a date for a new iPhone announcement.

Well, I hope Apple decides to unveil the iPhone 4G earlier than planned!

Over the weekend, much to my displeasure, my iPhone 3G - the one I took the trouble to jailbreak and unlock - managed to screw itself and was stuck on the Apple logo screen.

There was nothing I could do but to restore it to its original factory setting, which means in the process, the firmware and the base band was updated to the latest versions!

And that is why, I would be so glad if Apple decides to release the latest iPhone sooner than planned! Geohot, the renowned iPhone hacker, already has the tools for jailbreaking and unlocking the current iPhone firmware and base band. But he won't release it because that would mean Apple would try to patch the exploit before the release of the iPhone 4G. 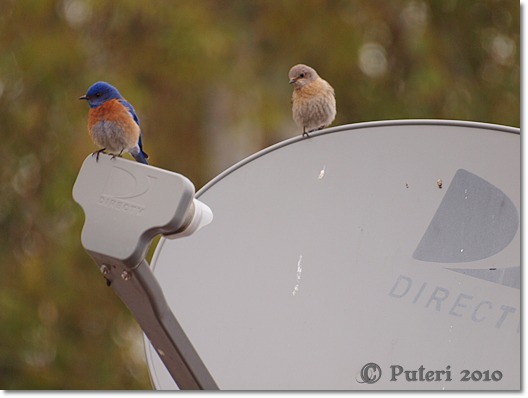 A male and female Western Bluebird on my satellite dish.
Yesterday I called up Directv to cancel a movie package that I had subscribed to. Doug has been complaining about the cost of the total subscription to Directv!

While I was at it yesterday, I also changed the package that I'd had for a long time. For under $3 more, I get more HD channels. That seemed like a good idea now that I no longer have the movie package. I was offered $5 off to keep the movie package ... I did pause and considered it! Nah. If you think of the annual expense, like I said, it does add up!
Posted by Puteri on Thursday, April 22, 2010 2 comments: 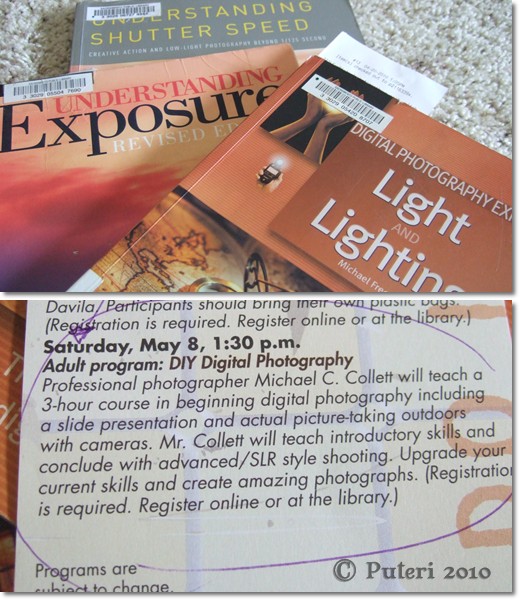 Free sounded good to me! And the fact that the course was going to be conducted by a professional photographer was the clincher for me. The helpful librarian said she could do the online registration for me. Thank you! I don't know how helpful the course is going to be, since it says "beginning digital photography" but, like I said, it's free!

I have 5 books on photography that I borrowed from the library. One that I picked up today, and four that I had renewed twice already! Borrowing from the library sure beats having to pay for them! And I can always borrow them again and again as needed! 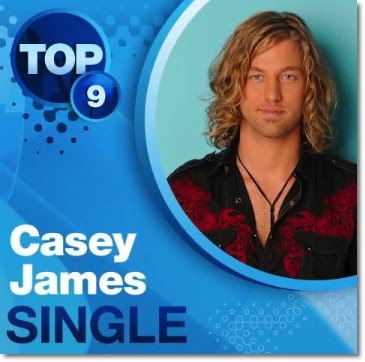 There are only two shows that I watch with regularity on TV. First, American Idol, and second, Dancing with the Stars.

But recently I added Human Target to that short list. This new series just ended this week, so now it's back to just AI and DWTS. When these two shows end, that's it for me.

Back to American Idol, I only started voting for my favorite, Casey James, this week. I didn't want him to exit as early as Chris Daughtry did in an earlier Season! I would be devastated!

Yesterday, I bought, from iTunes, two recorded versions of Casey James' performances on American Idol - Jealous Guy and Power of Love. I also bought Aaron Kelly's Angie, and The Long and Winding Road. I enjoyed very much Aaron's version of Angie the week he sang it. I remember when the song was a big hit back in the early 70s. I remember corresponding with my best friend, who had moved to Kuching, about the song. Yes, I was already a young teenager in the 70s, in case you don't already know!

The Long and Winding Road is one of my all time favorite songs. He sang both songs really well in the full recorded version.

The thing that bugs me the most about AI and DWTS this season is the clash on Tuesday! Grrrr! I flip between the two channels, and it frustrates me to no end! 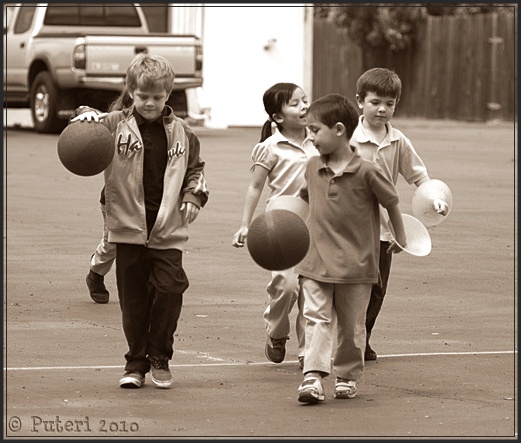 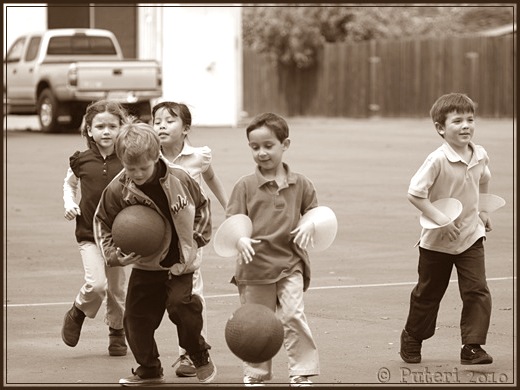 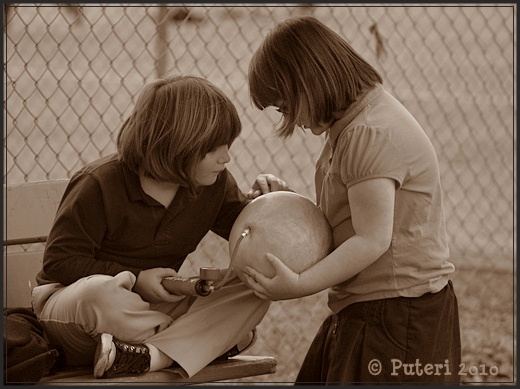 Is that a leak? 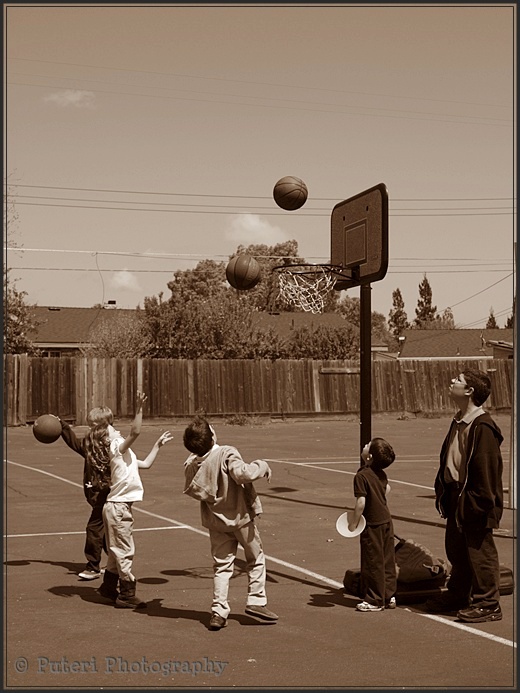 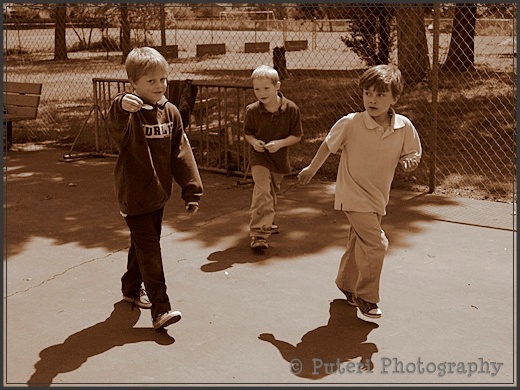 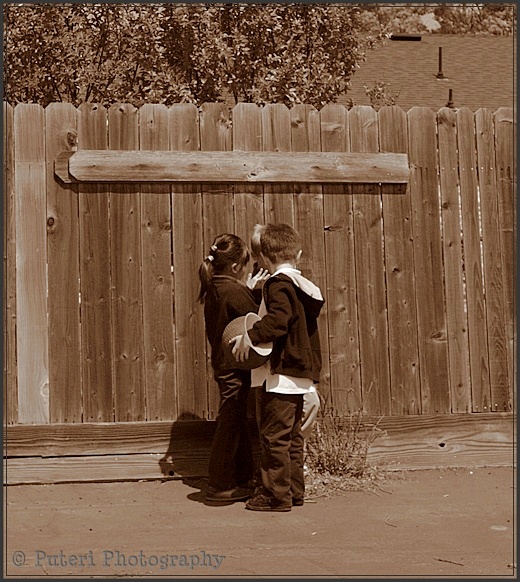 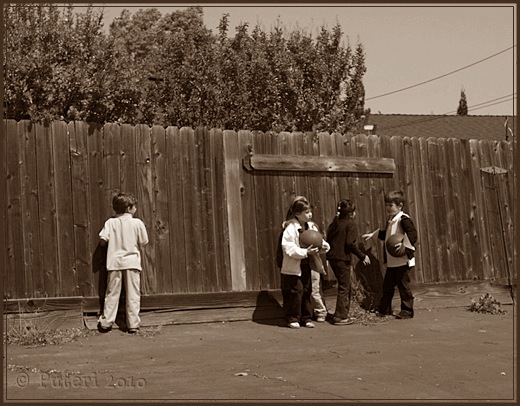 By the Wooden Fence
Posted by Puteri on Thursday, April 15, 2010 No comments: 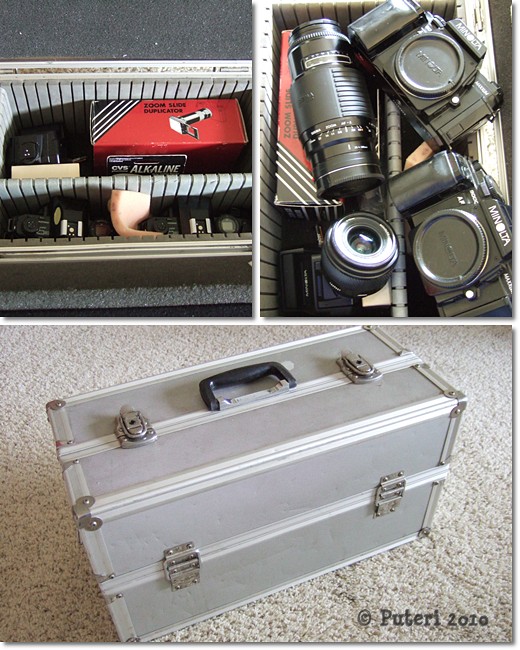 My neighbour and friend dropped by on Sunday afternoon, supposedly to see my camera and macro lens. I do not have a macro lens and I don't know how he got the idea that I had one. Maybe from seeing the close-up pictures that I had shared on Facebook.

Anyway, when he came he had his camera case with him. I couldn't wait to see what film camera he had, and was surprised that it was quite similar (same line but not the same model) to the Minolta auto-focus film camera that I had picked up from my mother-in-law's church thrift store.

Initially my friend thought that I had a Sony dSLR. He had read some where that the Sony dSLR can use the old Minolta auto-focus lens. I had not heard that Sony had actually adapted the Minolta Maxxum cameras and renamed it the Sony Alpha.

Long story short, if I had owned a Sony Alpha I would have been willing to buy off the three lenses that he had.

But I was surprised that he left his camera case and everything in it with me! Make use of whatever you want, he told me. All I wanted from that case was to borrow one lens so I could test whether the Maxxum Minolta camera that I had worked. He didn't say he was giving everything in the case to me, just for me to use!

I am still waiting for the batteries for the camera to arrive (special internet order), so I can't say if my Minolta Maxxum works. I'll just have to wait a little longer to find out.
Posted by Puteri on Wednesday, April 14, 2010 2 comments:

Wished I had one 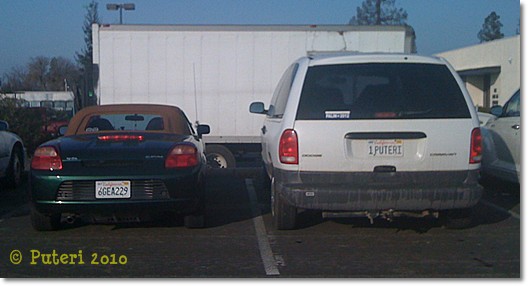 One day, at the weekly market parking lot, I parked my dirty mommy mobile next to a little green, and shiny sports car. As I got out of my mini-van, I couldn't help admiring the sleek lines of the sports car.

Did I wish I had a car as beautiful as that? Of course I did! Not that it will be useful with kids in tow! But one can only dream!
Posted by Puteri on Monday, April 12, 2010 No comments:

Output of an old camera

In my previous post I wrote about my impetuousness. Yes, that impetuousness also led to the bidding and subsequent winning of an old Minolta SLR camera!

I couldn't resist when I saw how cheap the price was, and I rationalized the purchase by saying, hey, since I already have all the manual focus Minolta lenses, why don't I just go ahead and get an SLR camera which I can also use with the lenses?

Also, I had never ever owned an SLR camera. Better late than never, eh! 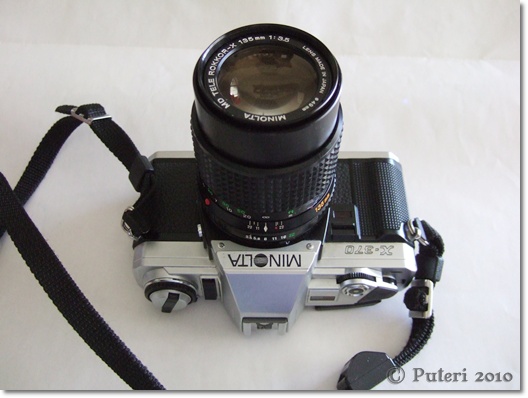 Yesterday, I finally used up the roll of film that I had put inside the Minolta camera. I took it to CVS last night to be developed and I was quite pleased with the photos! There were a few blurry pictures, but overall not bad for someone who has used a SLR camera only a few times in the past. 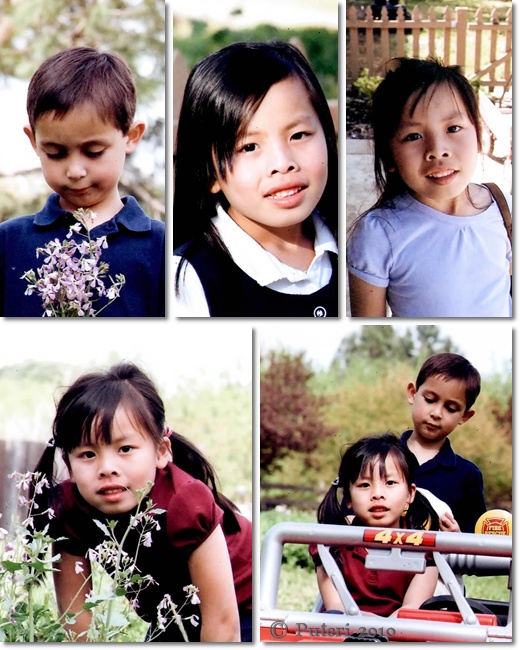 The color looks a little odd. That could be because the film was Agfa, and that the roll of film had an expiry date in 2004!! That fact alone could be a major reason for the odd color.

I thought I was compulsive! Impetuous, describes me more aptly!

Take a look at this! These are used, manual focus lenses, all acquired within the span of two weeks! 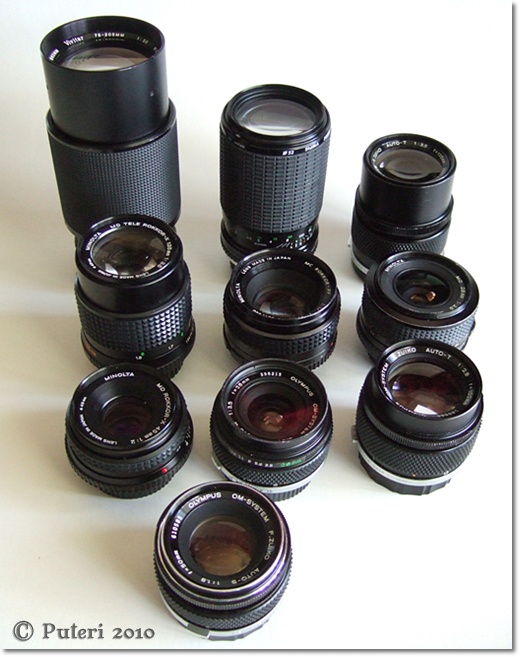 While researching on lenses for DSLR cameras I came across information that the old manual lenses can be given a new lease on life with an adapter that fits your particular DSLR camera!