Today, about a month after I arrived in Malaysia, I am finally able to use my iPhone (which was locked to AT&T) with a DiGi sim card. Woohooo!

Yesterday, I updated the iPhone firmware to the latest firmware, the iOS 4. I did that because I learned that there was a software to jailbreak that version of the firmware as well as a software to unlock the phone on ALL basebands.

I lost the previous unlock because my iPhone crashed and the only way to get it going again was to restore it to default factory setting. The iPhone hackers did not want to release the unlock software until after the release of the iPhone 4. Well, the iPhone 4 has been released, and after patiently waiting for the jailbreak and unlock softwares, my patience has been rewarded.

The instructions for the jailbreak and unlock were clear and easy to follow. Since this was not the first time I had jailbroken and unlocked my iPhone, the process was a breeze.

Unlock with Ultrasn0w.
Posted by Puteri on Monday, June 28, 2010 No comments:

Photography with an ultra-wide lens 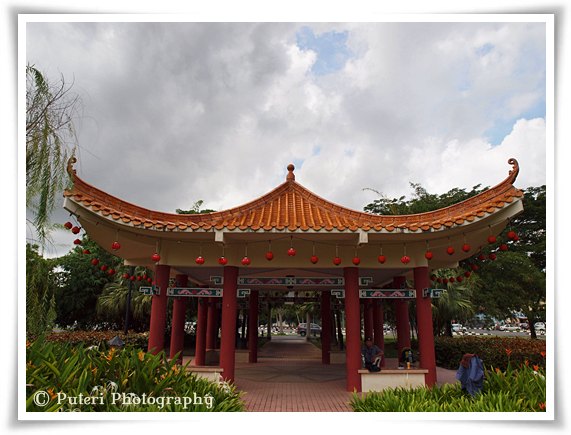 When I bought my dSLR, I only bought the body so that I could spend the amount saved by not spending extra on the kit lens on a 12mm-60mm lens. I love the ultra-wide angle on this particular lens and have been reading up on how to use an ultra-wide lens.

According to Ken Rockwell, the ultra-wide lens is not for "getting it all in"! He continues on to say that they are for "getting close and bringing the viewer into the photo, not for fitting a subject into a photo". 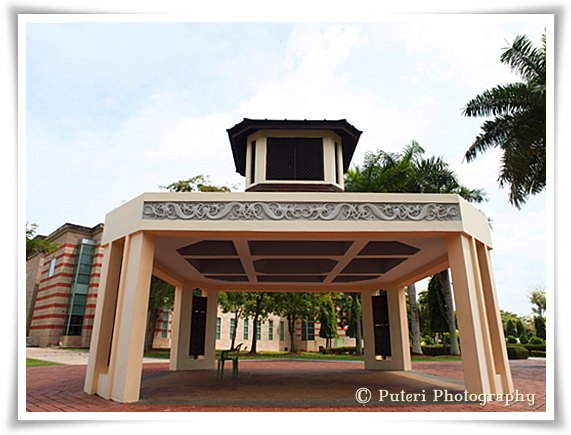 Oh well. I did try to get the viewer in with these two pictures but they also appear like I tried too hard to get everything in!

I can't wait to get to Kuala Lumpur so I can try again with the Petronas Twin Towers. Last year, I took some pictures, but that was before I had my dSLR!
Posted by Puteri on Saturday, June 26, 2010 2 comments: 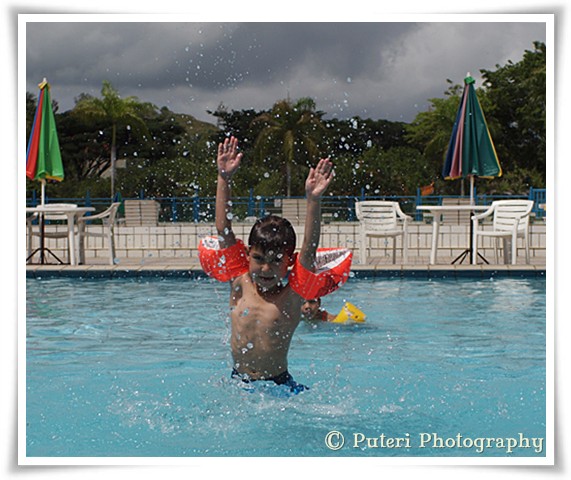 I took the kids to the local public pool this morning. There were no other kids at the pool this morning, which was really nice. It was cloudy most of the morning, and so the sun wasn't beating quite as fiercely as it could.

The water looked cool and inviting, but I wasn't even tempted! I didn't want to mess my hair with the chlorine and also when the sun did shine through the clouds, I wasn't interested in being baked by the sun. 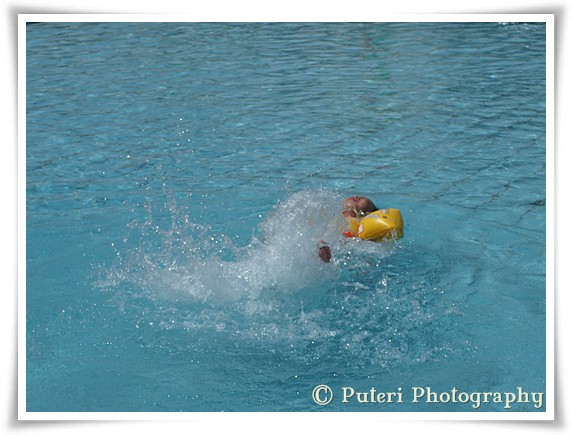 Anyway, the kids had a great time. It was hard to get them to leave the pool. There's always another day, I told them. The pool is opened every day except for Mondays, but it is not likely that I will take them during the weekends. Weekends are always popular with most people. I wanted to avoid the crowds, that was why I waited till the school break was over before I took my kids!

The kids only paid 50 sen each to swim in the pool. It only cost a ringgit for an adult who wanted to swim. I didn't have to pay anything because I wasn't going to swim. That's a very reasonable fee for the use of the pool.

Before we left for Malaysia, I promised the kids that I would take them to the pool more often this time. Last year, I don't think I took them more than a handful of times. So this year, I will keep my promise and take them more often!
Posted by Puteri on Monday, June 21, 2010 No comments:

How do you like my butterfly header for the blog? That is just one of the butterflies that regularly flutter into my mother' garden.

There are several white butterflies fluttering in the garden but I don't know what it is about these particular butterflies. They never seem to stop on any flower or leaf! When they do, they don't stop long enough for me to photograph them! 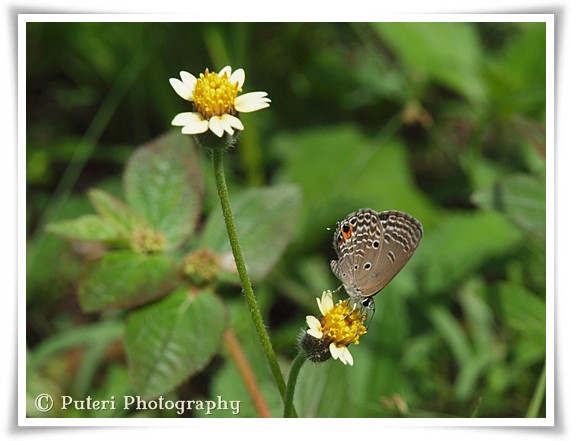 Cycad Blue (Chilades pandava pandava)
And then there are the really small butterflies. They are quite plentiful, and I was surprised at how beautiful their wings can be. Naturally I just had to take lots of pictures of them! They are usually not disturbed when I get close to them to photograph them.

I still have not been able to take any picture of the red dragonflies that like to fly above the big drain in front of the house. What does it take for them to land on a leaf or something? I want to photograph them!
Posted by Puteri on Sunday, June 20, 2010 2 comments:

This morning I dropped by at a good friend's house. She was in but unfortunately she couldn't invite us in because there was major renovation work going on at her house. The renovation work has been going on for several weeks now and I had heard from her who some of the construction workers were. Thirteen and fourteen year-old kids.

It is indeed sad in this modern day and age, in my little home town, children prefer to make a living instead of go to school.

The construction contractor knows he shouldn't be employing children, but from all accounts no one forced the children to work. From the contractor's point of view, it is better that they learn a skill in construction from him than waste their life and maybe even get into vices like drug abuse, theft and breaking and entering into homes.

According to my friend, the contractor is a very nice man, concerned about the neglect the children are experiencing from their parents, and by giving them jobs he is really taking them under his wings. I watched the contractor work along side his young workers. He does look like cares for the children. Some may accuse him of exploiting the children, but I think he has a point when he says, he is providing a form of education for the children.

I don't know the full story about the family life of the children, and I can't pass any judgement on them. They claim one of the reasons they are not in school is that they do not have birth certificates. Without birth certificates, it is impossible for them to be enrolled in any school.

Sad but such is life for some in Malaysia.
Posted by Puteri on Saturday, June 19, 2010 No comments: 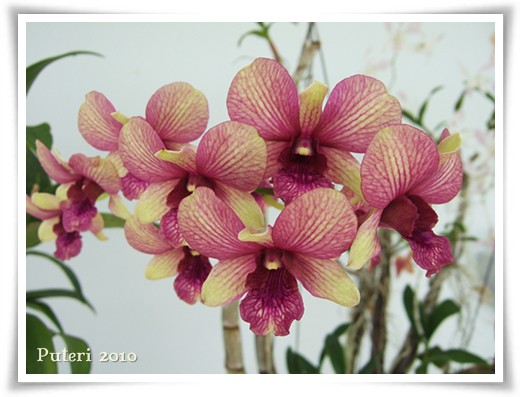 I visited one of my good friends yesterday, and that was where I took the picture of this blooming orchid. I think the colors are very attractive, and I don't ever remember seeing these colors on any orchid plant before. It reminds me very much of the blood orange (Citrus sinensis), not so much the colors but the way the colors come together.

I have three pots of orchids at home, but alas, they are barely alive! I love orchids but I just do not know how to maintain the plants and keep them blooming every season.

Maybe a good gardening book on how to grow orchids will help?
Posted by Puteri on Friday, June 18, 2010 1 comment: 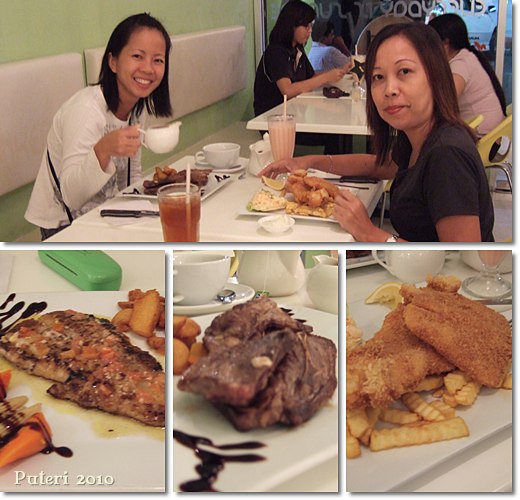 Last night I took two friends out to dinner. One is a blogger friend whom I last saw two years ago at her parents home in Sarikei. One of the comments I made after we were seated at the dinner table was, "Either I have grown bigger, or you have grown smaller!"

"Smaller," she said of herself. She was ill recently and had lost some weight as a result. Well, at least, she hadn't said I had grown bigger! :-)

The other friend, I had only seen once since I arrived in Malaysia almost three weeks ago. Last night was a good opportunity to meet up and catch up with both of them over dinner. I was in fact quite surprised that my kids did not protest more about my not taking them along with me! Dinner would not have been as pleasant with the kids along. Conversation would have been constantly interrupted.

There are other friends that I would like to meet over dinner too. There are still a few weeks left of our summer vacation in Malaysia so there is still time.
Posted by Puteri on Wednesday, June 16, 2010 1 comment:

I can't remember where I read the news about an eye infection (pink eye) going around in the country when I arrived in Malaysia two weeks ago.

But still, when Duncan complained about "something" in his eye, and rubbed one of his eyes till it turned red and puffy, I did not associate the eye infection with his case. After all, we were never around anyone with the infection. Well, at least, not that we were aware of!

The next day, it was only when I noticed the redness in my eye, and the scratchy feeling in that eye, did I realize that I had an eye infection and so did Duncan. Later that day, my father too complained that he had an eye infection! And the next day, my mother had it on both eyes at the same time, whereas my father and I had the other infected as well only on the following day. Duncan looked like he only had one eye infected.

None of us went to see the doctor, because here in Malaysia, we can get eye drops for the infection at the pharmacy's without a doctor's prescription. The eye drops were really effective for treating the infection.

Thank goodness we are done with the eye infection! Er, what is the likelihood of a re-infection soon after we had it?! I hope we are truly done with it for the remainder of our stay in Malaysia!
Posted by Puteri on Sunday, June 13, 2010 No comments: